A bunch to catch up on.  The Victoria reading was awesome, even though, in terms of stutters and mumbles it probably was my worst.  My mouth was perpetually dry and, I don’t know, mistakes tend to create this feedback loop. Glitches all around. Still, probably the loveliest crowd (who seemed to be o.k., or even charmed by my nervousness) and one of the nicest venues (I always want super-8 loops to be playing behind me during readings!) and so well organized. Open Space is my favorite thing about Victoria right now. 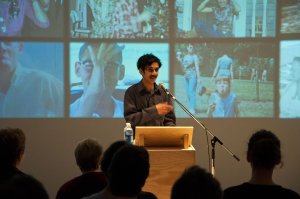 I read some Cloud Farm stuff that seemed to go over really well, so I’ll try and incorporate that in more readings. Also threw in some poems by my friend Rob Taylor, who’s got a new book. Anne-Marie was spellbinding, Garth wielded language like a master swordsman. Then we went and drank lotsa beer and danced manically to a local cover band.

The following Monday was the w2 reading that also was a lot of fun. I read last, which means I had at least 3 beers in me;  noticeably better for my nerves.  Also, video! probably the first time I’ve got to watch myself reading and yes, dear readers, it’s as mortifying as you may imagine. Still, a good learning experience, and there are a bunch of things I can be aware of now, to improve how I read. I’ll maybe save the thoughts for another post, and just let you watch it. I did dedicate a poem to The Internet  so I can’t really make excuses not to share. Also, thanks again to Sean Cranbury for making it all happen (and for holding onto the hat I left behind at the bar.)